*This Short Story—in its entirety—was written and is copyrighted, by Jae Lei Nyght.

The ocean was a mysterious place. Her water loving, yet simultaneously predatory.

The dark liquid danced around Erin’s fins as she joined the front lines, the sea whispering sultry promises and alerting her senses of easy prey nearby.

Stay focused Erin, she told herself, frustrated at her lack of self-control. She squeezed past her platoon’s newest sergeant, Kerri Barns, armor jostling as she slid it into place. Kerri tossed her an agitated glance. Erin ignored her. barely.

Take that for stealing my promotion Kerri, she thought murderously.

The sea hummed with the electricity of a hundred Syreni bodies packed close together.

Syreni were born with the same ability as sharks, the ability to sense the presence of other sea life by its body’s unique electric frequency. For Erin, being so close to so many Syreni was suffocating. She grew tired of standing still when the sea called to her, begging her to swim free. Besides, shouldn’t the sharks have appeared by now?

At first it was so subtle, Erin mistook it for a school of fish passing by, but then the vibration grew, the sensation sending uncomfortable shock waves shooting up her toes and across her skin like live-wire. She shivered, unaccustomed to so much raw power. 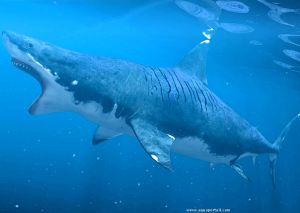 The  Megalodon Shark was a story of legend when Erin was a merling.

The human’s believed they’d died off millenniums ago, much like the Pliosaur, but Syreni knew better. Megalodon Sharks migrated deep into the oceans depths at the dawn of the ice age, and have lived there ever since.

They tended to hunt in deeper waters, even traveling so far as the oceans in Antarctica, keeping them well away from human eyes. They tended to keep away from Syreni altogether, preferring easier prey. Not today, Erin thought. Today, for the first time, she would see one face to face.

The pulsating heat-waves grew unbearable, so thick and coiled Erin wanted to scream in agony. The pressure increased, like a weight held against your chest. Erin’s breath caught, the underwater waves flattening in the abnormal surge of electricity . . . and then . . .

They were in front of her.

Five Megalodon sharks floated before her, their silver sandpaper skin glittering in the lightless sea, beady black eyes seeing but not seeing the world around them. It wasn’t a secret that sharks had terrible vision, but what they lacked in sight they made up for in predatory senses.

“State your business, Karcharious,” snarled the tracker Syreni in the front of the line. He was the Syreni who’d felt the sharks in the distance and sounded the alarm. Tracker Syreni were special in that their senses were highly refined, in the way that an average Syreni would feel a Shark at a distance of a hundred miles, a tracker could feel that same Shark, millions of miles away.

“Just passing through,” the squad leader replied, his husky voice grating across each of their minds like sandpaper. It was an uncomfortable feeling, talking with a shark.

“I’m afraid we have to ask you to take a path that doesn’t involve passing through our city,” the tracker continued, obviously feeling powerful with a Syreni army at his back.

We should be afraid, Erin thought, catching the eye of a Megalodon off to her left. He was closer than she’d like him to be, his snout almost brushing her chest and sending ripples of shock waves, like molten lava, coursing through her torso uncomfortably.

What you are looking at Gorgona? Keep staring and I might get offended, the shark taunted. Erin snorted, earning her a stern glare from her captain.

Erin glared at the vermin who dared call her a merling; a child. She was a Corporal in Trident’s Royal Army, the most powerful army in all of the Fey realm, land or sea, and she was next in line to be a Sergeant (if she could prove to her captain that she wasn’t reckless and uncontrollable).

Erin snarled before she could fully process the repercussions of taunting a Megalodon shark. Her snarl exposed her own pearly-whites and she was rewarded by the Shark’s momentary look of fear.

Come on Karcharias, afraid a merling could best you in a fight? Erin taunted back, giving in to the sharks game, and was rewarded by the bristling of his gills. His eyes took on a feral look, his alpha complex getting the better of him. One more trash talk would put him over the edge.

“. . . we need you to turn around or we’ll have to use force,” the tracker continued. 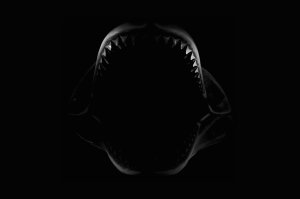 The shark unhinged his jaws, letting loose a sound equivalent to a cheetahs roar and lunged at her.

The hundreds of Syreni at her back saw one shark move and attacked in unison, bodies glowing with bio luminescence as their fins sliced through shark’s flesh like a knife through an apple, the oceans waters bleeding a deep . . . dark . . . red.